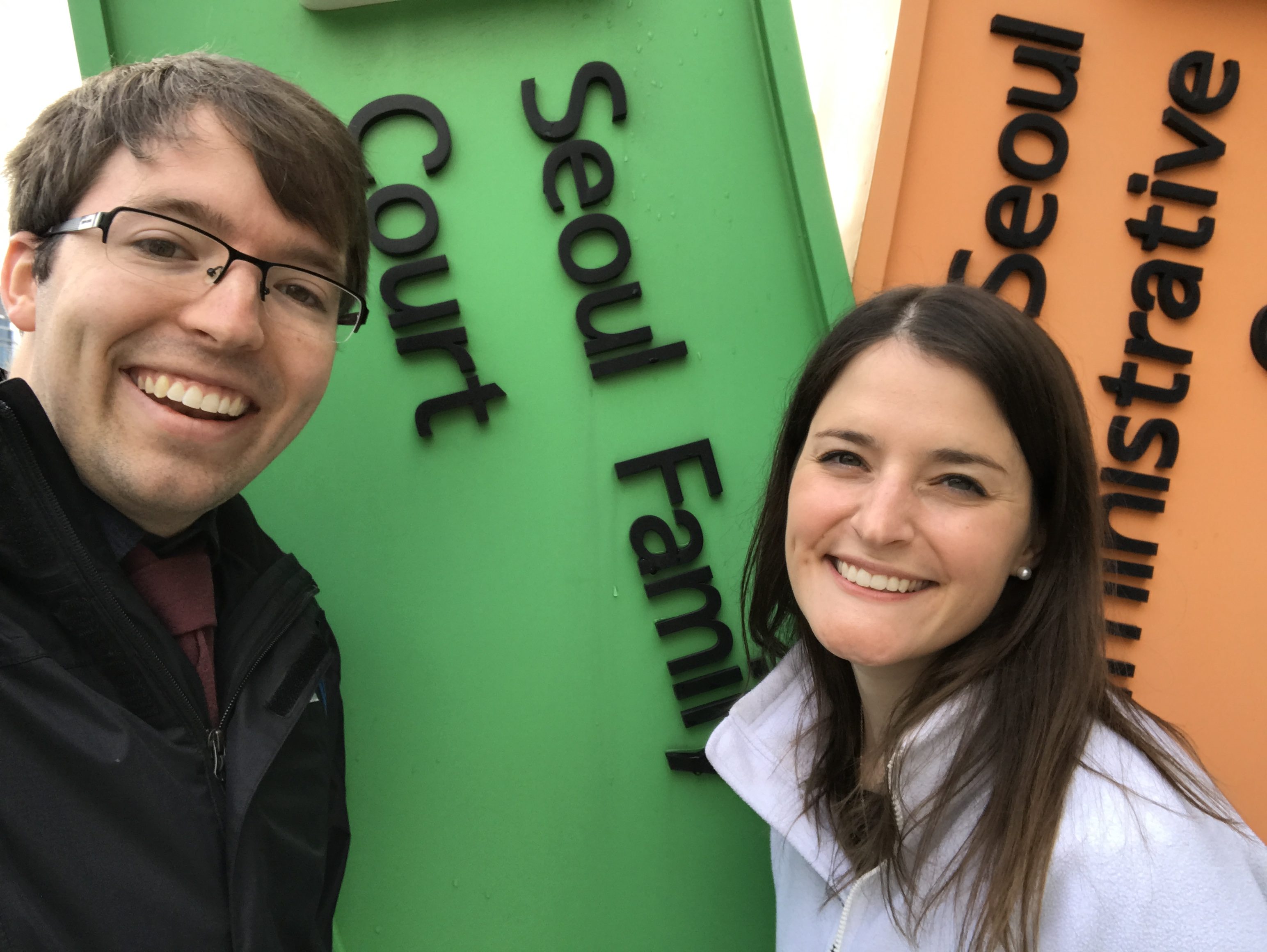 We woke up early on Thursday, incredibly nervous for court (well, I was…Brian is always cool as a cucumber). Yes, so many families had told us court isn’t a big deal. And yes, it’s supposed to be mostly a formality. But we knew we had a brand-new judge on their first day of adoption cases, and we had no idea how to prepare. 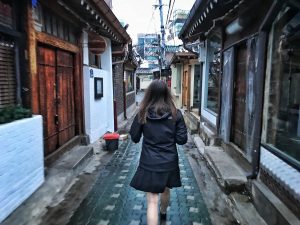 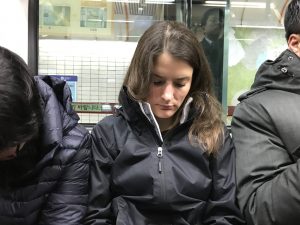 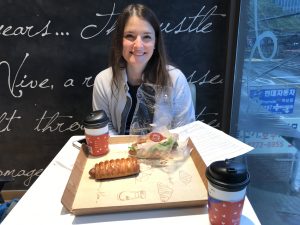 For the second morning in a row, we found the Paris Baguette not far from SWS, ordered breakfast (including hot grapefruit tea, which is one of the most delicious things I’ve ever tasted), and sat down to run through our home study and practice questions from a who-knows-how-old list of questions our agency had given us.

We reviewed the basics: “Why did we want to adopt? Why Korea? What sights have we seen in Korea? What medical conditions are we aware our son has? How did the visits go?” And then we memorized the perfect back and forth, including who would start and who would answer certain questions. We even looked up the correct pronunciation of Gyeongbokgung Palace (you know, in case the judge asked, because it’s clearly the most defining factor of our ability to parent a child). None of It really helped my nerves at all. 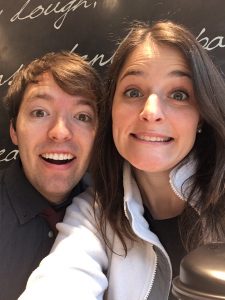 And then, just before 9:25, we walked up the hill to the SWS office. Maybe one of these days I’ll walk in the front door of SWS without shaking with nerves, but so far I’m 0 for 3! We met with another social worker and the translator, who spoke with a perfect British accent and caught us totally off guard. 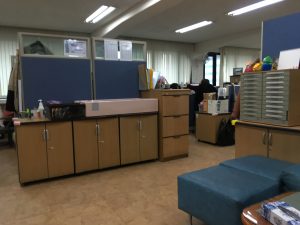 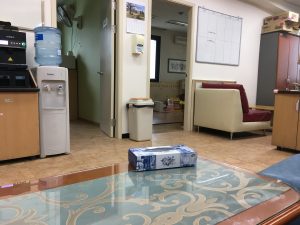 Since we were the only SWS family in Korea at the time, the social worker drove us in her own car to the courthouse, maybe 10 minutes away. We made our way through security and then upstairs to the 5th floor. We found seats near the other 10:00 families, but no one really talked much because we were all so nervous. A member of the court staff came out and checked our passports, and our social worker and translator just laughed at how jittery I was.

At one point our translator said to us, “Usually we prepare our families for the time with the judge, but he’s new, so good luck!” I didn’t feel exceptionally lucky in that moment, haha. 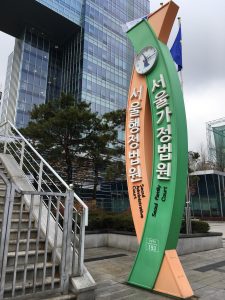 We were family number 5, and the last family for the 10:00 time slot. We walked in and sat in the chairs before the judge. He spoke a while to our social worker in Korean, and we had no idea what he was saying because our translator didn’t translate any of it. Suddenly, he asked us to confirm our names, which we did. He asked us to confirm that we had met Gideon, which we did. He asked us to confirm we knew Gideon has developmental delays, which we did. And then he asked us if we had any questions for the Seoul Family Court, and, just like we had been instructed to say, we requested the court change Gideon’s name to Gideon J***** Troyer. I’m not sure if that’s actually the expected response anymore, because the translator looked at us funny before she passed our answer on to the judge. The judge spoke with our social worker one more time, and then he said, “Thank you, that will be all.” And we left! Pretty sure four minutes and four questions has to be some sort of record for short and sweet!

We asked our social worker if that was normal, and she said no. She said the judge was new to adoption cases and asked her many questions about our court expedite, what it meant and what he should do next in light of it. The judge also promised to keep our case moving on! Sure enough, he issued Preliminary Approval (approving us to be Gideon’s parents) the very next day, in record time. 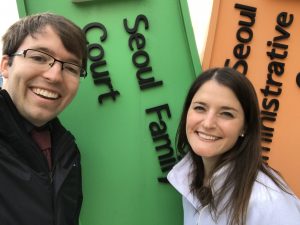 After our time with the judge, we stayed and talked with a few 10:30 and 11:00 families waiting for their hearings, and then we made our way to McDonalds because Brian really wanted to try the infamous bulgogi burger we had heard so much about! I also saw they had curly fries on the menu, so we had to order those too. They did not disappoint! 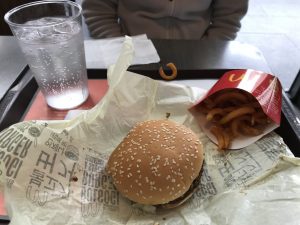 We took the subway back to Insadong and met up again with Krista and Jon. We walked about 30 minutes from Insadong to Namdaemun Market, which is another of Seoul’s huge, permanent, all-day markets. Namdaemun had booth after booth of purses, clothes, trinkets, and food, but we found it lacked the traditional market feel of Gwangjang. Still, it was well worth the visit, and we were able to pick up some Pororo chopsticks and delicious mandu before heading back toward Insadong! 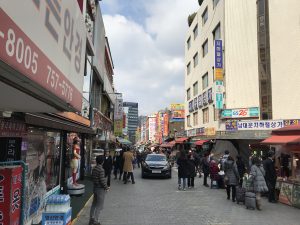 We remembered we wanted to see inside of a hanok, so the four of us loaded our Citymapper app and made our way back to Bukchon Village. Bukchon Village is actually more of a residential district than a tourist district, so keep that in mind as you visit. It’s important to be quiet and respectful in the area and pay attention to signs indicating whether homes are public or private. That said, there is one particular hanok that is open to the public (closed on Mondays), and it’s well worth the visit! Just look for the Bukchon Traditional Culture Center on a map. There are also several hanoks available on AirBNB if you’re looking for the full hanok experience! 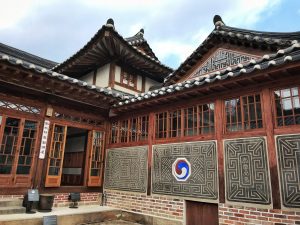 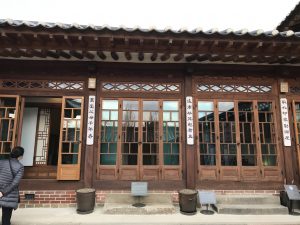 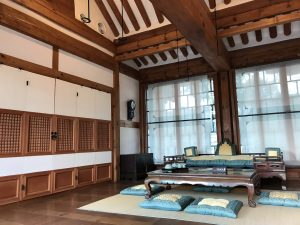 We ended our tour of the hanok with more “cheese” ice cream, of course. Nothing like a little pre-dinner dessert! 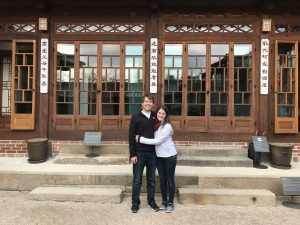 Let’s talk about dinner. Krista suggested a chicken place, because we had heard so many people rave about Korean fried chicken. So we ducked into the first place we saw in Jongno and tried to get warm by the heaters. Our waitress gave us an English menu and left us to decide what we wanted (in Korea, most places have a button at the table, and the wait staff don’t come back until and unless you push the button…also, another side note, you don’t tip in Korea, and it can actually be offensive to do so).

I’m pretty sure the waitress got the last laugh, though, because you guys, it was the hottest dang thing I have ever eaten in my life. We all got one whiff of the chicken as soon as the waitress set it on the table, and it was enough to basically make the hair on your neck stand up. We all looked at each other sheepishly, realizing we had possibly just made a grave mistake.

Moral of the story: If you see a menu item with just one chili pepper for the heat rating, don’t be fooled. It’s hot. It’s spicy hot. It’s very spicy hot. 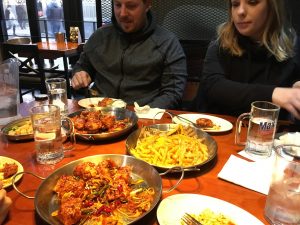 Between the chicken and feeling progressively worse since leaving Gideon, I was quickly running out of steam. So Brian and I said goodnight to our friends, and we headed back to our hotel in Insadong. It was still pretty early, so we turned on the TV for the first time since we arrived in Korea. There were three channels in English – BBC Earth, Discovery, and The History Channel (so Brian was basically in heaven). We watched some random guy traveling the Trans-Siberian train across Russia, and I fell asleep, super sick and snuggled against Brian, to the sound of trains and tigers and corrupt governments.