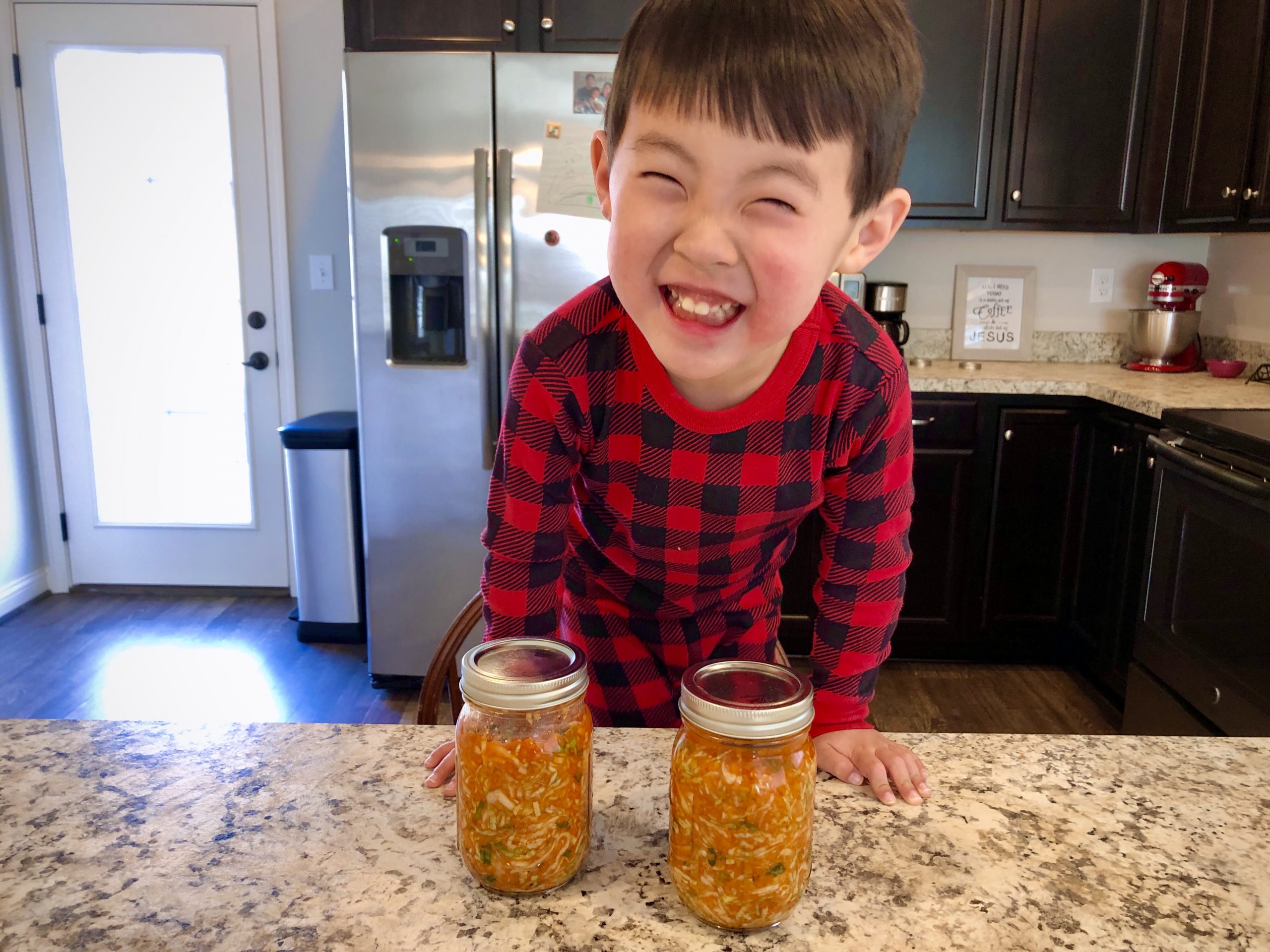 About 2 years ago, way back when Brian and I were still waiting for the Seoul Family Court to approve us to meet Gideon, my friend Michele invited a bunch of us mamas-in-process to come to her house and learn how to make kimchi. So on one super early Saturday morning, I drove the five hours down to Chattanooga and up the mountain to her house. The six of us had such a sweet time connecting with our kiddos’ culture and lamenting our wait together. 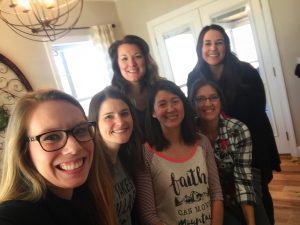 When I got home, I practiced and practiced until I successfully made my first batch of kimchi all by myself. I was so proud! 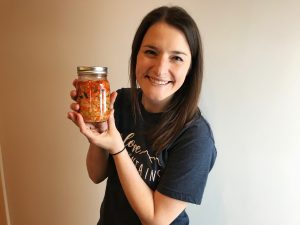 Earlier this week I realized we were running low on kimchi (not sure you are supposed to leave the same jar in the fridge for a year, but it’s still kicking!), and since we are cooking an authentic Korean meal with friends from church tomorrow, I decided to introduce Gideon to kimchi-making too!

Michele’s recipe below (scroll down to the very bottom for JUST the recipe) works with both napa cabbage, which is the traditional Korean way, and green cabbage. I like my kimchi crunchy, so we choose to make yangbaechu (green cabbage) kimchi around our home. If you’re feeling intimidated, don’t be. If I can make kimchi, you can too! Promise.

First, rinse and quarter a large green cabbage. Again, we like green cabbage, so we use green over Napa cabbage. But it’s up to you! Traditionally, the cabbage is cut into bite-sized pieces, but we like it really, really small for Gideon, so we use a mandolin slicer to cut our cabbage almost like slaw. 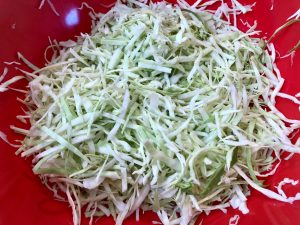 Next, layer the cabbage with course sea salt. When I tried my very first batch of kimchi, I made the mistake of using fine table salt, and oh my gosh, it was so salty I had to toss the entire batch! So don’t repeat my mistake, haha. Use 2-4 tbsp of course sea salt, depending on the size of the cabbage (2 for small, 4 for large). Today we used 2 tablespoons. It should be pleasantly salty to taste. 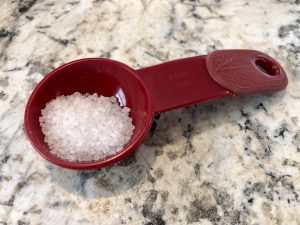 Traditionally, cabbage is pounded to draw out the water and have enough liquid to cover the cabbage and begin the fermentation process. But Michele told us we can just use salt! Salt draws the water out of the cabbage so you don’t have to pound the heck out of it. Let the salted cabbage rest for 1-3 hours, covered with a kitchen towel, to allow the salt to draw out the water. Napa cabbage will have to rest longer than green cabbage, as the cell walls are thicker. Toss the cabbage every 30-60 minutes to redistribute the salt. Here’s a photo of our cabbage resting. 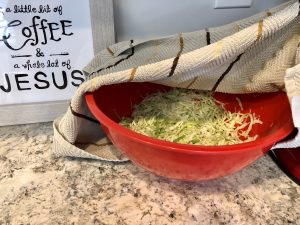 While the cabbage is resting, prepare the rest of the ingredients. In a food processor, chop up 2-4 large carrots (washing and leaving the peel of the carrot helps the fermentation process), 1 daikon radish (I used about 1/3, because mine was huge!), 1/2 head of peeled garlic cloves, and 1-2 tbsp peeled ginger root (I used about a 1/2 inch nub). Then finely chop 1 bunch of scallions. Combine and set aside until the cabbage is ready to go! 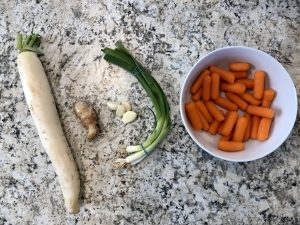 When the cabbage is done resting, combine all of the ingredients above, along with 2-4 tbsp of fine Korean red pepper. Korean red pepper gives the kimchi its nice red color, but it doesn’t actually affect too much in the way of heat. The heat of the kimchi mostly comes from the scallions and the garlic, so adjust those accordingly. We use about 2 tbsp of Korean red pepper. As you mix your kimchi, you will notice liquid in the bottom of the bowl. Don’t toss this! We drew out that liquid with the salt, and we’ll need it to begin the fermentation process. 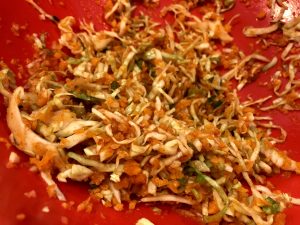 Now it’s time to stuff our kimchi into jars! Press down on your kimchi mixture as you stuff your jars, extracting even more water from the cabbage. I like to use the handle of our ice cream scoop covered in a plastic sandwich bag, because I’m fancy like that. 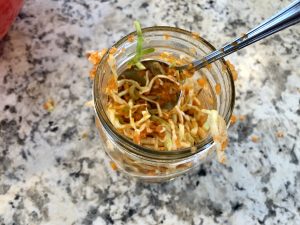 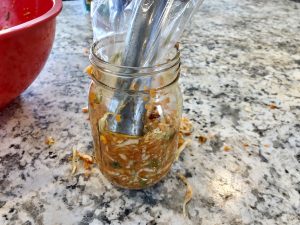 Leave about one inch of head space in your jar, making sure that at least a fine layer of liquid covers the top of the kimchi. This will ensure that your cabbage doesn’t spoil before the fermentation process starts. 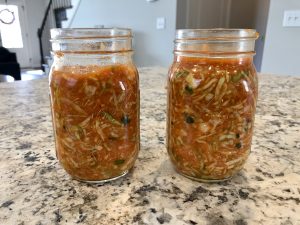 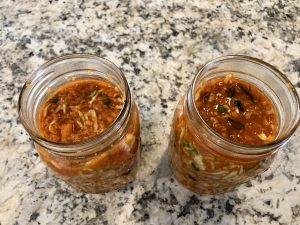 Seal the jar and set it on the counter for a week to ferment. Per Michele, the longer the better, but again, this is based on personal taste. You’ll likely see bubbles near the top by day 3, which is an indication the fermentation process is on its way. We usually leave our jars on the counter for 3-5 days (because I’m usually too excited to eat it to wait a full week), then we refrigerate after opening.

Don’t forget to pose proudly with your kimchi! You did it! 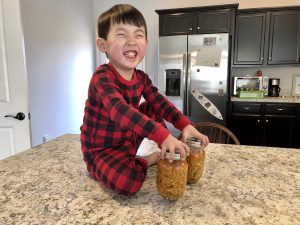 For our Korean dinner with friends tomorrow, I also made three kinds of banchan (Korean side dishes). This afternoon I made what I like to call “lazy bibimbap” with my homemade kimchi and banchan. You guys, it was AMAZING! I threw some white rice in a bowl with bulgogi marinade from the Korean market. Then I added scrambled egg, Korean cucumbers, quick pickled daikon radish and carrots, and sesame mung bean sprouts. I topped it all off with some homemade kimchi. Holy cow it was good! The only thing I was missing was bibimbap sauce. Maybe that’s the next recipe I’ll have to try! 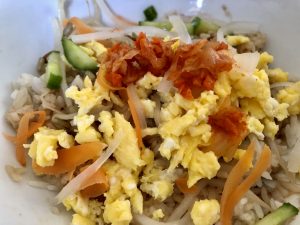 Cut the Napa cabbage or green cabbage in quarters, then rough chop it into bite size pieces. Layer the cabbage in a large bowl, salting between each layer. Adding salt at this stage helps to draw the water out from the cabbage so you don’t have to pound the cabbage to get enough liquid to cover the kimchi and start the fermentation ferment. Let the cabbage rest for 1-3 hours, covered by a kitchen towel, and toss it occasionally to redistribute the salt. (Napa cabbage will require a longer resting time than green cabbage, because the cell walls are thicker than green cabbage.)

Put the radish, carrots, garlic and ginger in a food processor and chop it to shreds. Add this mixture to your Napa or green cabbage. Add in the red pepper flakes and green onions. Toss to mix. Red pepper gives the kimchi a pretty color, but it doesn’t really affect the heat. The garlic and scallions are what really add the heat to your kimchi so adjust it per your tastes.

As you toss your mixture, you’ll notice all the liquid at the bottom of the bowl. Don’t throw that away. You’ll want to make sure your ferment is covered in liquid, and you’ll use this for that purpose. After everything is mixed well, stuff your jars. Press down on the kimchi mixture as you fill up your jars. When you do this, you will extract more liquid out of your cabbage. Leave about 1 inch of head space in your jar, making sure that at least a fine layer of liquid covers the top of the kimchi. Seal the jar and set it on the counter for a week to ferment. The longer the better, but again, this is based on personal taste. You’ll likely see bubbles near the top by day 3, which is an indication the fermentation process is on its way.